A Secret Garden on the Eastern Shore

My husband and I have driven Route 13 through the Eastern Shore of Virginia countless times but had never noticed the little lane off to the right around the town of Cheritan when traveling south. On a recent trip we took that right turn to travel a few miles to Eyre Hall and I enjoyed a stroll through the lovely grounds. 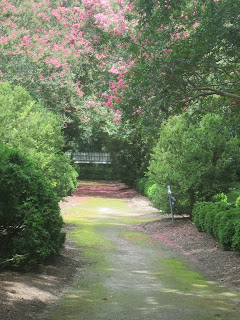 A grass covered path lined with massive boxwoods leads to blooming crape myrtles at the gardens of Eyre Hall on the Eastern Shore of Virginia.
Eyre Hall is a plantation house on property that has been in the Eyre family since 1688. Littleton Eyre completed the gambrel-roofed manor in 1758. Staying in the same family all these years has helped maintain the original sense of place, making it one of the best-preserved colonial homes in Virginia. Its classic style and well-maintained preservation contributed to Eyre Hall being placed on the National Register in 1969 and becoming a National Historic Landmark in 2012. It is a highlight of the Eastern Shore of Virginia House and Garden Tour every spring.
The gardens are considered one of the oldest in the United States. Crape Myrtles are surrounded by parterres of boxwoods, typical of the colonial style. I must admit that you have to have grown up in the south to appreciate the aroma of boxwoods. This northern girl starts looking for cats when she is in the presence of boxwoods.
Speaking of boxwoods, when entering the garden, I met a couple from Williamsburg. They mentioned that it was a pleasure to smell boxwoods because the ones in Williamsburg are now dying out. The colonists brought some of the boxwoods from England so it is sad to know that these long-time residents are being replaced. What isn’t a problem for these boxwoods is the dreaded Boxwood Blight. This virus is fatal and will quickly kill surrounding boxwoods. Symptoms are leaf spot, browning and defoliation and unique to the blight is black streaking on the stem. Once infected, the virus will remain in the soil for years so replanting boxwoods is not a viable option.
There are also lush turf areas in the gardens making the area seem so calm and soothing. However, the mixed borders bring color to the garden. Laurie Klingel has been the force behind the gardens for two decades. It is she who maintains it, adds fresh designs when appropriate and knows much of Eyre Hall’s history and stories. If you are lucky enough to visit when she is working, I understand Laurie will cheerfully answer questions.
It is a pleasure to walk through gardens that hold so much history. The gardens are free to visit daily however, I would steer clear of Eastern Shore Home and Garden Tour week. Next time you crave fresh seafood and take a trip to the Eastern Shore of Virginia, plan a trip to Eyre Hall. You’ll be glad you did.