What is the story behind Earth Day?

The 50th anniversary of the first Earth Day will be celebrated on Wednesday April 22. Here in Halifax County, in normal life we would have a large celebration honoring this milestone at the Halifax Farmers Market on Saturday April 25th. However, a modified drive-through with earth related information bags were available. The VCE Southside Master Gardener Association had planned a display on pollinators. Let’s look at how this special day came about.
In 1962, Rachel Carson’s book Silent Spring was published. I reread the book in memory of her 100th birthday in 2007. This book warned of the dangers of pesticides especially DDT. The Cuyahoga River in Cleveland caught fire because of chemical waste dumping. This was also a time when students were protesting the Viet Nam Conflict. Senator Gaylord Nelson from Wisconsin decided the time was ripe to make the country aware of pollution’s impact on our planet. 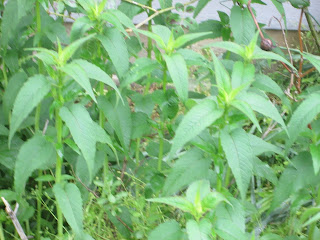 This bee balm, Monarda didyma, will soon sport a curled flower that is a hummingbird magnet. Try to plant more native plants to support birds, bees and butterflies to garden to sustain our planet.

At a conference in Seattle, Nelson floated the idea of Earth Day in late 1969. He invited the entire nation to join in the day. Nelson asked Representative Pete McCloskey to join him in leading the effort. And if you are wondering, yes this was a bipartisan effort. They called on Denis Hayes, a young activist who had served as student president at Stanford University, to serve as Earth Day’s National Coordinator. This turned out to be a wise choice. Student volunteers and staff from Nelson’s Senate office banded together to get the ball rolling. And roll it did, most major cities participated in that first Earth Day along with millions of demonstrators to bring awareness of our fragile environment.
This effort led to the establishment of the United States Environmental Protection Agency, the Occupational Safety and Health Act and the Clean Air Act. In 1972, the Clean Water Act was passed and the Endangered Species Act the following year. Richard M. Nixon was President during this time. Clean water and air, safety belts and eagles at Kerr Lake are things we almost take for granted nowadays.
In 1990, Denis Hayes was brought back to expand Earth Day into a global effort. That Earth Day led to big improvements in recycling waste worldwide. Now 192 countries participate in this day of awareness. Earth Day 2016 was chosen as the day to sign the Paris Climate Agreement. The focus of Earth Day 2020 is climate action. Certainly the cleaner air the world is experiencing in an indication that our driving, flying and factory operations do contribute to air quality since these things have been greatly minimized during this pandemic. We need to make changes to secure the health of our planet going forward. Science paints the factual picture.
While we aren’t able to join an awareness program this Earth Day, there are things that you can do at home. Learn how to compost your kitchen scraps to build nutrients for your garden. Assess your plant selection and dig out invasive aliens and replace them with native plants that support beneficial insects. Understand that cool season turf grasses go dormant in the heat of summer and stop watering to compensate. Better yet, reduce the size of your lawn and build a landscape with edibles and natives to feed you and the pollinators.
While we are all still practicing ‘social distancing’ due to COVID-19, and all county buildings are closed to the public, if you have questions gardening questions, you can best reach an Extension Master Gardener or Extension staff member by sending an email to wmccaleb@vt.edu or ask@ssmga.org. Stay safe and respect the earth that sustains us.