The Herb You Think You Can’t Grow

Cilantro, Coriandrum sativum, Is the herb that most people have told me they have no success growing. That is perfectly understandable because they treat cilantro like other annual herbs by purchasing a small pot, market pack or seeds in the spring. This will not work. To grow cilantro it is important to understand its life cycle.
Cilantro is an annual and with most herbs wants full sun and well draining soil. But cilantro likes cooler weather. I found that tossing out seeds in August/September works best. Cilantro will grow and remain green through most of the winter. One Thanksgiving a friend of mine was telling me she was having her family over for a big dinner. I asked if she wanted some cilantro to which she enthusiastically said yes. I was able to get her a big grocery bag full with no visible impact to my crop. 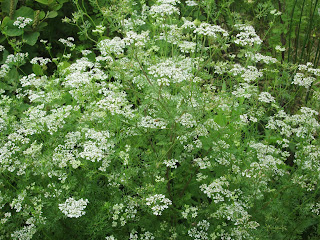 This cilantro plant is blooming now at the end of May. As the weather warms, the flowers will turn into seed – the spice coriander. Try tossing out seed at summer’s end for a bountiful crop of cilantro this fall into next spring.

Flowering generally starts in May and as I write this in the last week of May, it is in full flower. By June, the flowers will turn to seeds which are the spice coriander. So this is a real two-for herb. At this point the foliage will die out. I harvest some of the seeds but let others drop to the ground and green growth will emerge in late summer/early fall. It is easy to see that those small plants, marget packs or seed just wouldn’t have time to grow into a mature plant by the time hot weather rolls around.
Coriander has an ancient history going back to use by the Chinese in 207 B.C. who thought it to make a man immortal. Biblical references include Numbers 11:7 “Now the manna was like coriander seed” and Exodus 16:31 “Now the House of Israel called its name manna; it was like coriander seed, white, and the taste of it was like wafers made with honey.”(RSV) Ancient Hebrews made it one of the bitter herbs used for Passover. Greeks considered coriander useful for treating anxiety, perfume and a prized spice. Romans used the seed in vinegar to preserve meat. It was mentioned in “The Thousand and One Nights” as an aphrodisiac. Native Americans dipped the leaves into stews and ate the plants raw, in salads or steamed. Zuni tribe ground the seeds with chilies as a seasoning for meat.
To use the fresh leaves, cut as needed and use the small, immature leaves for a more robust flavor. Because it is in the Umbelliferae family, it is not at its best flavor dried. However, there has been some success drying the leaves in a frostfree refrigerator for several weeks. This maintains the green color and more flavor. Store in a dark place in a sealed jar. In her very useful book Planning, Planting and Harvesting Your Herb Garden Marianne Mittwede Ritchie suggests freezing - “gently wash the herb and pat it dry. Freeze whole in zip lock bags. Use immediately upon removing from the freezer.” To harvest seeds, cut the entire plant after the leaves and flowers have started to brown but before the seeds have scattered. Hang upside down in a paperbag and allow the seeds to dry and drop. Store the seeds in jars.
Whole seeds can be used in sweet pickles and vinegars. Crushed seeds are used for flavoring fish, chicken, curry sauces, sausage, meat loaf, hamburgers, vegetable stews, pork and lamb chops. Surprisingly, the seeds are also good in sweets such as gingerbread, bread pudding and custards. The leaves are good fresh in salads and on sandwiches. Fresh or dried can be used to make salsas and sauces.
One last thought on cilantro. I must admit that I find fresh cilantro tastes like soap and I am not alone. As a matter of fact, the great Julia Child agrees with me. It is a genetic thing, one that is still not absolutely defined but may partially have to do with the olfactory receptor gene OR6A2 which detects aldehydes which are found in cilantro and yes, soap. So you ask, if you hate it, why do you grow it? Simple, it is a beautiful plant and easy to grow but most importantly it has small white flowers which are a very important nectar source for pollinators especially when not that much is blooming so early in the season.
While we are all still practicing ‘social distancing’ due to COVID-19, and all county buildings are closed to the public, if you have gardening questions, you can best reach an Extension Master Gardener or Extension staff member by sending an email to wmccaleb@vt.edu or ask@ssmga.org. Keep washing your hands and wearing your mask when you go to public places and throw out some cilantro seed this fall. You’ll find you can indeed grow this lovely herb.